I’m not a ‘do one thing until it is done, then do the next thing’ person. Mostly, I think, because there is rarely just ‘one’ thing to do. If you are cleaning your room, that involves doing laundry and re-shelving books and realizing that you need to buy new socks, plus wondering where your favorite pen has disappeared to and thinking it’s time for new pictures on the wall. Cooking dinner means washing dishes, noticing you are out of butter and thinking about what to have for lunch tomorrow.

I’m most happy when I am in the middle of at least three things. I think this is likely frustrating for my employers and other people in my life, who look at my half-finished piles of whatever and wonder when I’m ever going to finish anything.  The answer, of course, is usually that they’ll all be finished about the same time. 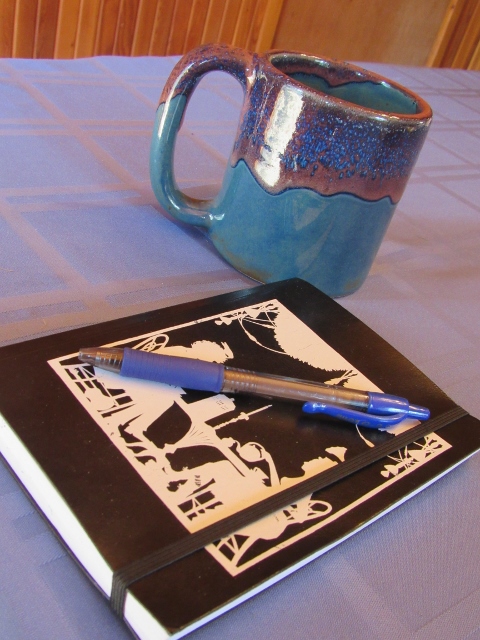 I remember moving out of my house a few years ago, and my then-boyfriend showed up to help me load the Uhaul. He was very much a one-thing-at-a-time dude, and therefore would get angry if you interrupted with a new wrinkle in the task he was performing. He saw each as a separate thing, to be addressed individually. The look on his face when he saw a dozen half-empty boxes and what appeared to be nothing ready to go was… well, not a compliment.  But he changed his tune a half hour later when suddenly (to him) almost everything was ready to go.

Similarly, an average non-travel day means I’m likely to be reading a book, writing in my journal or typing on my computer, interspersed with making tea, eating a meal and changing the music. I’m pretty good at cleaning up after myself, but not usually in a ‘drink last sip of tea, get out of chair and put mug in the dishwasher’ kind of way. The mug will likely sit on that end table until I finish the chapter I was reading. The journal might sit on the table while I go take a shower, then work on my computer. At the end of the day, the dishes will be in the kitchen and the various books and electronics will be back where they belong – but in the middle of the day, they are usually strewn everywhere.

Which is fine if you’re in your own house… but not so great if you’re staying with friends. I try to be a good houseguest, which means certainly cleaning up after myself, and well as chipping in where I can with chores and errands. No one likes coming home from work to see that their company (who slept in while they had to get up early, and hung out at home while they dealt with work BS) has left their shit all over your house. At least – this is how I imagine they would feel. I try not to let that happen.

All of this to say: I’m quite happy this morning/afternoon, as I settle in at my sister’s house, where most of the residents seem to have much the same pattern of work, and where they know I will clean up after myself.