I’m sure I’ve mentioned China Miéville before – here, in fact – a new speculative fiction love for me. Since picking up The Scar, I’ve read Perdido Street Station, Looking for Jake (short stories) and now Un Lun Dun. And The Kraken is sitting on my shelf, waiting for me to finish Middlemarch.

Un Lun Dun (UnLondon) is an ‘other-London’ in the tradition of Alice in Wonderland,  Neverwhere (and various other stories, none of which I can recall right now) where there’s a whole other city/place below/between/just-out-of-reach of the real city, where freaks or aliens or whatever live, and everything is just a bit different than the city most people live in.

Miéville grabs with glee this license to mess with the world.  He is a meticulous world-builder, and never misses an opportunity to add a bit of crazy fun to every situation the intrepid heroes are faced with. He gives us things like upside down cars that are used as boats (which are called ‘car’ but with the word upside-down on the page, it sounds something like ‘rack,’ but the best way to pronounce is ‘turn your head upside-down, then say car’), trash is alive (and can be pets), librarians are explorers, houses are made from defunct technology, and giraffes are the scariest animals.  And – my personal favorite – the binjas.  Seriously. Trash cans (bins in the UK) which are actually ninjas. They keep their weapons inside their cans and have the perfect camouflage. Binjas. Freaking. Awesome. The illustrations are also done by Miéville, quite the talented guy. 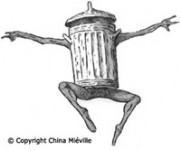 Miéville wrote this book aimed at a YA audience, so – at least in the beginning – it doesn’t have much depth. But stick with it, it will be worth your while. There’s  a video interview (which you can see here, sexy & smart – woohoo) where he talks about the book -why and how and stuff.  This book interrogates the quest model so common in sci-fi books (whether for kids or adults) and pokes some fun at it as well. The best thing about this book? It’s fun.  He’s clearly having a blast writing it, and it is fun to read it.

One thought on “Binjas – FTW!”